Frei Betto: a international Call against the Bolsonaro’s humanitarian crimes

A genocide is taking place in Brazil!  As I write, on 16 July 2020, COVID-19, first detected here in February this year, has already killed 76,000 people.  There are already almost two million people affected.  By Sunday 19 July we shall reach a total of 80,000 fatalities. It is possible that when you read this dramatic appeal, we shall already have reached 100,000.

When I think that in the Vietnam war, over twenty years, 58,000 lives of US-American military personnel were sacrificed, I grasp the scale and seriousness of what is taking place in my country.  This horror causes anger and revulsion. And we all know that precautionary and restrictive measures that have been adopted in so many other countries could have avoided slaughter on such a scale.

This genocide is not the result of the Bolsonaro government’s indifference.  It is intentional. Bolsonaro delights in the deaths of others.  When he was a member of Congress, he said in a TV interview in 1999: ‘Voting won’t change anything in this country, nothing, absolutely nothing! Change will only come, unfortunately, if one day we engage in a civil war here in Brazil, and do the work the military regime didn’t do:  kill 30,000.’

When he voted for the impeachment of President Dilma Rousseff, he dedicated his vote to the memory of the Brazilian army’s most notorious torturer, Colonel Brilhante Ustra.

Because of this great obsession with death, one of his main government policies is allowing the sale of weapons and ammunition.  When asked at the entrance to the presidential palace if he wasn’t concerned about the victims of the pandemic, he replied, ‘I don’t believe in these figures (27 March, 92 deaths);  ‘We’re all going to die one day’ (29 March, 136 deaths); ‘So what? What do you want me to do?’ (28 April, 5,017 deaths).

Why this necrophiliac policy? From the beginning he stated that the important thing was not to save lives, but to save the economy. That is why he refuses to order a lockdown, follow the guidance of the World Health Organisation and import respirators and personal protection equipment. The Supreme Court had to delegate this responsibility to state governors and city mayors.

Bolsonaro did not even respect the authority of his own ministers of health.  Since February Brazil has had two, both sacked for refusing to take the same attitude as the President.  Now the ministry is headed by General Pazuello, who has no knowledge of health matters; he had tried to hide the data about the increasing numbers of victims; he has employed 1.249 military personnel in important posts in the ministry, without the necessary qualifications; and he has cancelled the daily interviews from which the population received guidance.

It would take too long to list all the measures to release resources to aid low-income victims and families (over 100 million Brazilians) that were never taken.

Not satisfied with such lethal measures, now, on 3 July the President has vetoed the section of a law that made obligatory the use of masks in shops, places of worship and educational institutions. He has also vetoed the imposition of fines on those who failed to keep the rules and the government’s obligation to distribute masks to the poorest sections of the population, the main victims of COVID-19, and prisoners (750,000). These vetoes, however, do not overturn local legislation that has already made the use of masks obligatory.

On 8 July Bolsonaro overturned three sections of a law approved by the Senate, that obliged the government to supply drinking water and health and cleaning materials, to install internet connections and distribute basic food supplies, seeds and agricultural implements to indigenous villages. He also vetoed emergency funds intended for indigenous health services, and to give indigenous and members of Afro-Brazilian ex-slave quilombola communities emergency aid of R$600 (120 Euros or US$120) for three months. He also vetoed the obligation on the government to provide more hospital beds, ventilators and oxygenation machines to indigenous and ex-slave communities.

Indigenous and ex-slave communities have been decimated by the increasing socio-environmental devastation, especially in the Amazon region.

Please give as much publicity as possible to this crime against humanity.  Condemnation of what is happening in Brazil must reach your country’s media, social networks,  the UN Human Rights Council in Geneva, and the banks and companies that represent the investors the Bolsonaro government so greedily wants.

Long before The Economist did so, on social media I have been calling the President BolsoNero – while Rome burned he played the fiddle and promoted hydrochloroquine, a drug scientifically shown to have no effect on the new coronavirus.  But its manufacturers are political allies of the President…

Thank you for your solidarity in publicising this letter.  Only pressure from abroad can halt the genocide that is devastating our dear, wonderful Brazil.

Frei Betto is a Dominican brother and writer, an adviser to the FAO and to social movements. 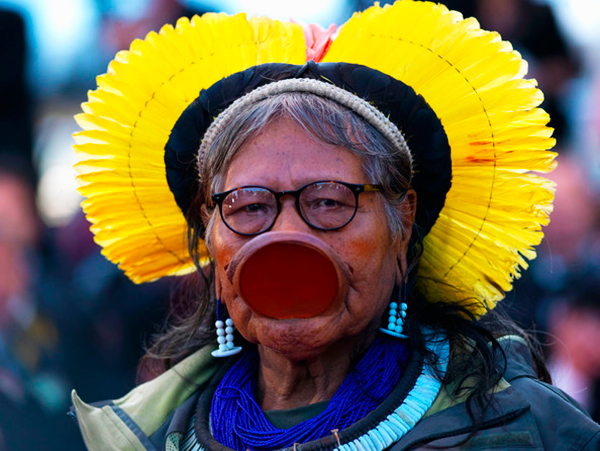